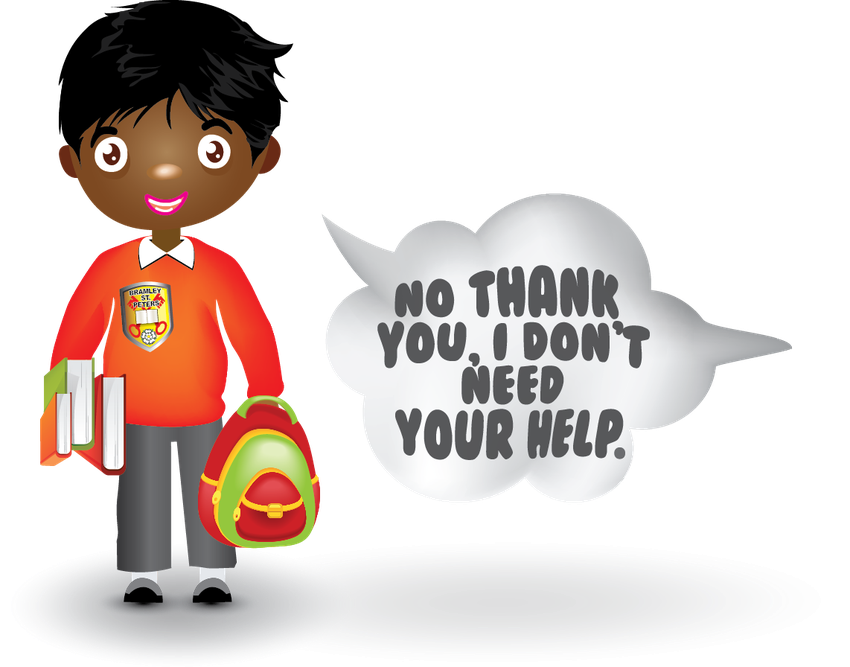 “Isaac where is your PE kit?” queried his teacher.

“My mum forgot to pack it for me!” replied Isaac.

His teacher wasn’t impressed with this answer but it was the truth. That morning, Isaac’s mum had put his shoes on, tied his laces, brushed his hair and picked up his book bag. There was no PE kit though. Normally Isaac’s mum would remind him to get his kit and she would pack it into his bag but she must have forgotten it was Wednesday; PE day.

The following Wednesday, Isaac woke up and went to the bathroom. He would usually hear his mum downstairs making breakfast. Today he couldn’t hear anything.

Isaac realised that his mum was still in bed. He went to see her.

“Isaac, I’m really not well. I’ve been poorly all night,” whispered mum. “I won’t be able to help you today. You’ll need to get your brother and you to school by yourself.”

What! How was he meant to do that? He didn’t know what needed doing – that was mum’s job.

Mum did look very poorly though and Isaac realised he had no choice. He went into his brother’s room and woke him up.

“Jacob, you need to get up. Mum’s poorly so I will need to take you to school,” Isaac explained to his younger brother.

The morning did not go well! Isaac spilt the milk as he was pouring it into his cereal bowl, he couldn’t find his PE shorts and his brother squirted toothpaste all over the bathroom sink as he was trying to put it on his toothbrush. Before he knew it, they were behind schedule. The boys arrived at school late that day, much to Isaac’s disappointment. He hoped his mum would be better when he got home.

Unfortunately Isaac’s mum was still poorly when they got home. Neither was she better the next morning.

“I’m sorry Isaac you will need to help me again today,” mum spluttered as she coughed.

The morning was an improvement on the day before. Isaac opened the milk bottle and it poured it carefully today. He also helped his brother clean his teeth, rather than just leaving him to it. He couldn’t remember where he had put the house keys so they had to run part way to school but they arrived just as the classes were walking inside.

Isaac’s mum was poorly all week and all weekend. By Monday morning though, Isaac had learnt some lessons and had created a routine for him and his brother. He understood what his brother could do by himself and what he needed help with. Isaac had his homework completed and put in his book bag the night before. Today they were on time and Isaac even had a little time to play with his friends.

On Wednesday morning, Isaac’s mum was better and things returned to normal.

“Isaac can you please find your PE t-shirt and bring it downstairs so I can pack your bag?” she shouted up the stairs.

Isaac came bounding down the stairs.

“It’s ok mum. I’ve already found my kit and put it in my bag. My kit and book bag are by the door ready for me to pick up as we leave.” Isaac responded.

“Wow! It looks like you don’t need my help then,” joked Isaac’s mum. “I am very proud of how you coped over the last few days. Thank you for your help and I’m pleased you are becoming independent.”

Isaac walked into the kitchen, beaming. He felt proud too.